To share your memory on the wall of Clement Gilliam, sign in using one of the following options:

To send flowers to the family or plant a tree in memory of Clement Eugene Gilliam, please visit our Heartfelt Sympathies Store.

We encourage you to share your most beloved memories of Clement here, so that the family and other loved ones can always see it. You can upload cherished photographs, or share your favorite stories, and can even comment on those shared by others.

Guaranteed hand delivery by a local florist
AM

Posted Mar 06, 2020 at 09:53pm
Clement was one of the most interesting people I have ever met. He always wanted things in one pacific spot,he would talk about random things nobody was even talking about. He was one of the most kindest people in this world. We are all going to miss him dearly. Clement will always be in our hearts.
Comment Share
Share via: 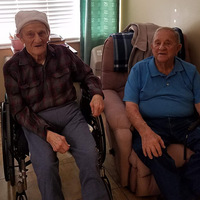