To share your memory on the wall of Iris Henderson-Koch, sign in using one of the following options:

The Family requests all visitors to please wear a proper face covering.
Memorials may be made to the Alzheimer's Association.
Read Less

To send flowers to the family or plant a tree in memory of Iris Marie Henderson-Koch (DeClue), please visit our Heartfelt Sympathies Store.

Receive notifications about information and event scheduling for Iris

We encourage you to share your most beloved memories of Iris here, so that the family and other loved ones can always see it. You can upload cherished photographs, or share your favorite stories, and can even comment on those shared by others.

Ron Harrell and family sent flowers to the family of Iris Marie Henderson-Koch (DeClue).
Show you care by sending flowers

Posted Jan 05, 2021 at 09:50am
Ron, Wishing you peace to bring comfort, courage to face the days ahead and loving memories to forever hold in your hearts.

Flowers were purchased for the family of Iris Henderson-Koch. Send Flowers

Flowers were purchased and a memorial tree planted for the family of Iris Henderson-Koch. Send Flowers

Posted Jan 02, 2021 at 07:46pm
As our family is to lay our dear sweet Aunt Iris to rest I’ve reminisced on my sweet memories of her . I used to stay with my Grandma Harrelson a lot to keep her company & I made several trips back and forth to Aunt Iris’s house. I can close my eyes and still remember the smell of her home , I still remember the lighting in her kitchen . She would always say “honey do you want to take a plate for you and Grandma ?” I’d say it’s ok aunt Iris but she still insisted and always sent me with a soda pop 🥰. My Dad spoke of Aunt Iris often and always said how she could get anything out of an eye for someone, and she always took good care of him. I remember Pete their dog so well . We love you Aunt Iris and I’m thankful God gave you 95 sweet years with everyone. Our thoughts and prayers with Jan, Ron and their families. R.I.P youll forever be loved and in our hearts !
Comment Share
Share via: 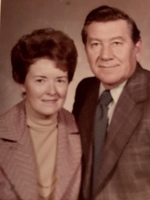