To share your memory on the wall of Larry Baldridge, sign in using one of the following options:

Provide comfort for the family of Larry Baldridge with a meaningful gesture of sympathy.

We encourage you to share your most beloved memories of Larry here, so that the family and other loved ones can always see it. You can upload cherished photographs, or share your favorite stories, and can even comment on those shared by others.

The McNabb Family and LC and Marilyn Boyer have sent flowers to the family of Larry Baldridge.
Show you care by sending flowers

The McNabb Family purchased the The FTD Eternal Affection Arrangement for the family of Larry Baldridge. Send Flowers

Posted Jun 19, 2019 at 04:03pm
I first met Larry when he came to visit his cousins, the Yount boys. He was a good friend, and the worlds greatest popcorn maker. I am sure he will be missed by many! I guess he and the Yount boys will be causing trouble again
Comment Share
Share via:
LB

Posted Jun 19, 2019 at 03:55pm
Sorry we couldn’t be there in person. Our sincere condolences and prayers are with you!

LC and Marilyn Boyer purchased the The FTD Living Spirit Dishgarden for the family of Larry Baldridge. Send Flowers 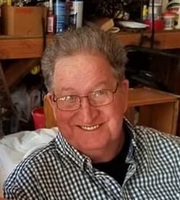