To share your memory on the wall of Larry Wilson, sign in using one of the following options:

Larry lived a full and happy life, always working hard and doing his best to make all those around him happy. Using his entrepreneurial spirit and incredible work ethic, he ran successful businesses his entire adult life. In 1975, he opened a gas station, and in 1978 he founded Potosi Basements and Foundations, which is still in operation today. He was incredibly proud of these accomplishments.

Throughout the years, he cared for many, and was always willing to lend a helping hand to anyone in need. Larry knew how to work hard and made sure that those around him learned the importance of working hard as well. In his later years, Larry enjoyed listening to old music, watching old TV shows and spending time with his family - especially his grandchildren - and beloved pets.

Larry enjoyed a long, joyful life surrounded by those who loved him. He was very proud of being a self-made man. His generosity knew no bounds and he had an endless amount of love that he shared. Anyone who knew him would tell you that he loved hugs and never let you leave without saying “I love you.” He will be missed by many.

In keeping with Larry’s generous spirit, the family requests donations be made to the Elks Lodge Backpack Program in lieu of flowers.


Masks will be required to attend the service. Thank You.
Read Less

To send flowers to the family or plant a tree in memory of Larry Ellsworth Wilson, please visit our Heartfelt Sympathies Store.

Receive notifications about information and event scheduling for Larry

We encourage you to share your most beloved memories of Larry here, so that the family and other loved ones can always see it. You can upload cherished photographs, or share your favorite stories, and can even comment on those shared by others.

Posted Jan 13, 2021 at 12:58pm
My condolences to Larry's family. I met Larry in 1998 when I built my home. Larry poured the basement and finished it to perfection. Still to this day, no leaks, no cracks. Larry's work ethic was unmatched and you certainly didn't have to wonder what he was thinking, not to mention his word was as good as gold. All of these qualities made him who he was, as well as garnering the love and respect of all who knew him. Rest in Peace, my friend, you've earned it!
Comment Share
Share via:
DA 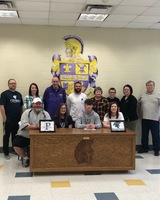